The Rebirth of Maryland Avenue

For any lover of cities it is immensely gratifying to see a town recover something that once was thought lost. That is the spirit of the European cities ravaged in World War II—Dresden painstakingly reconstructing its bombed Baroque monuments,  Florence recreating Michelangelo's Ponte della Trinitá, stone by stone.

Even in America, where so much has been pointlessly destroyed, we  have managed to claw a little back. Badly designed, disfiguring freeways have been removed in San Francisco, Milwaukee and other cities. Gracious neighbourhoods and Main Streets have been rescued from decay.

Right now in the nation's capital, momentum is building to undo one of the classic disasters of the postwar decades, and restore a little of the integrity of Pierre L'Enfant's original city plan.

Everyone knows Pennsylvania Avenue, the broad boulevard that connects the Capitol and the White House. Its symmetrical counterpart on the other side of the Mall, though, has slipped into obscurity. Maryland Avenue ran between the Capitol and the Potomac shore, where the architect had assumed a commercial port would grow up (it's now a marina and the Tidal Basin)

Maryland took some hard knocks over the years. A railroad was run down part of it, and eventually half the street disappeared, dug away for a railway trench. After World War II, most of the surrounding neighborhood was destroyed and replaced with massive and unlovely federal buildings. Maryland, or what was left of it, became a government ghetto, a desert outside office hours.

Now, however, the District of Columbia and the National Capital Planning Commission have come up with some exciting plans not only to restore the street, but to bring some new life to the area around it.

The big idea is to deck over the railroad part of Maryland, thus restoring the entire axis from the Capitol to the Potomac. Along the way, the plan identifies unused and underutilized lands facing the avenue (waste spaces left from the Modernist, superblock planning of the 50's) and proposes to assemble them for residential and commercial development. Done with a sympathetic hand and a minimum of intrusive planning, it could lead to the creation of a new neighborhood centerpiece and an inviting new streetscape at minimal public expense.

Continue up Maryland towards the Capitol, and things really start to get interesting. This is where the plan runs smack into something big, something that lately has been very much in the news—the proposed Eisenhower Memorial.

No design for a public monument within memory has created so much controversy. Its critics see the closed competition as profoundly undemocratic, in fact rigged by the Memorial Commission to smooth the way for Frank Gehry to get the job. Gehry, who has never designed a monument,  delivered a jejeune and frivolous plan—also a hugely expensive one, filling an entire block with pastiches and images from Eisenhower's career. The effect is reminiscent of some elementary class exhibition, with photos and collages pasted to colourful construction paper.

Instead of coloured paper, though, in this case Gehry is proposing giant metal screens with images taken from historic photos. One critic has likened them to concentration camp fences.  Reactions have been startling. The entire Eisenhower family is screaming bloody murder.  Powerful figures in Congress are promising to hold up all expenditures for the thing if it ever secures final approval; the Memorial Commission itself has already been defunded by the House.

Critics of a traditionalist bent have been unanimously brutal, and Mr. Gehry has found small cheer even among the Postmodernist coterie. But one of the most serious flaws in the Memorial design was hardly ever mentioned. Paul Knight, an architect who blogs on urban design, was one of the first to spot the obvious:  Gehry's concept was completely lacking in context.

Postmodernist architects, like their Modernist predecessors, seldom if ever give any thought to the site of what they're building, or how it will live in harmony with its neighbors. The Memorial site actually includes a part of  the original Maryland Avenue. Decades ago, for reasons not entirely clear, traffic engineers had mangled the original course of the street and its intersection with Independence Avenue. In the first version of the plan, Gehry may not have even noticed the grand axis of L'Enfant's Maryland Avenue on which he was encroaching; or else, he chose to act as if it wasn't there.  On his second try, he added rows of trees where the avenue should have been, which didn't help things much.

—Paul Knight
Knight's very attractive idea is to restore this part of Maryland as a divided street, with a broad centre strip that would provide a proper site for a redesigned Eisenhower Memorial (roughly in the centre of the above plan). What is more, the restored axis from the Capitol could serve to site future monuments. As he puts it:  'Each new memorial would reinforce the next just as they do on Commonwealth Avenue [Boston] and Monument Avenue [Richmond]. Maryland Avenue would become a physical succession of history'.

The Gehry design smells dead right now; its very preposterousness, not to mention the wave of revulsion it has raised up across the country, suggest this might be a turning point in the way we look at public art and design. Knight's idea points the way to a civilized alternative. And it could be the cherry on top of what is looking like a delightful rebirth for Maryland Avenue and its neighborhood. 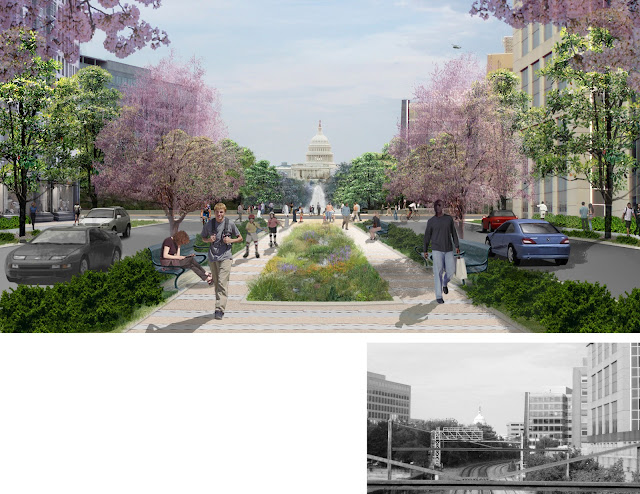 Posted by Dana Facaros and Michael Pauls at 10:21 4 comments: