Alamedas and Ramblas II: the Promise 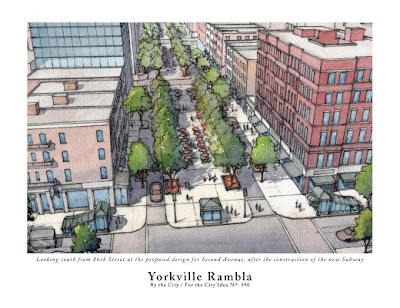 Can alamedas be adapted for American city centres? Why not turn the asphalt desert of a ridiculously wide American main street into a linear park like Barcelona’s Ramblas? Why indeed—in big cities or small towns, civilizing a too-wide street could be just the tonic a town centre needs. But there are always some complications in translating an element of urban design from one culture to another.

It’s been tried, in a fashion, and without any influence from Spain. Commonwealth Avenue in Boston’s Back Bay, a planned neighborhood of the 1840’s, has a central mall full of trees and benches that adds considerable grace to the area. But Commonwealth is a largely residential street, and a rambla only works the way it’s supposed to in a town centre where there are lots of people about.

A later experiment with a linear park would turn into a civic embarrassment for decades. New York’s ham-handed boy genius Robert Moses gets the credit for the Sara Delano Roosevelt Park on the Lower East Side. For this, several blocks of insalubrious tenements were blasted away and replaced with a parkway to let some light and air into the neighborhood, following the planning dogma of the day. The space was too wide to work; primitive landscaping, lots of concrete and chain-link fences contributed to a grim anomie. Worst of all, Moses never considered that he was putting his park only a block parallel to the down-and-out Bowery. Within a few years of its opening all New York was snickering at his mistake. At tremendous expense, Moses had created a civic space named for the president’s mother, and populated exclusively by bums.

Today, as bums give way to hard-working Chinese immigrants and yuppies with backpacks, the park has become considerably more respectable. Most of it has been filled with playgrounds and sports fields; still a dowdy, rather unloved place, it continues to be a work in progress.

The next American experiment along these lines was the ‘pedestrian mall’; usually nothing more sophisticated than closing off a main shopping street and adding a few benches and planters. Kalamazoo pioneered this innovation in 1959, and by the 70’s it was a universal dogma of planning and revitalization efforts. The overwhelming majority failed, and few survive today (Fresno, Minneapolis, among others). Often, it was the shop owners who yelled the loudest about the malls. Since they were completely closed off to traffic, there was no more street parking, which drove away customers. It seemed a backward and uncivic complaint to many at the time, but the merchants had a point.

But there’s no reason why a well-placed and well-designed rambla couldn’t work in an American city. If you want to see one in your town, keep these desiderata in mind:

Get the form right: You’ll need a street where you can lay out a center median of at least 40 ft, perhaps not more than 60ft, and one traffic lane on either side—not more—plus one on each for parking, deliveries and taxi stands. Those in fact are the dimensions of much of Barcelona’s Ramblas, though it widens out in places.

Pick the right street. Naturally, this has to be a street that can stand being shorn of a few lanes of traffic—but that’s many American downtown streets. And there’s no sense building it if there isn’t any considerable pedestrian traffic already. Barcelona’s, which has no parallel streets for competition, concentrates people. The crowds pass by 24 hours a day, and you can buy nearly anything along the way. In the neighboring city of Tarragona, the Rambla Nova is a quieter street on the edge of the centre, wider and more formal. It has a delightful contemplative air to it; a more urbane space would be hard to imagine. Often a good choice is a street just parallel to a major thoroughfare, like the Rambla de Catalunya, the modern continuation of Barcelona’s Ramblas that runs parallel to the city’s posh shopping street, Passeig de Gràcia.

Two lines of trees: One on each side. Plane trees, hardy and beautiful work well in most climates, as they do in Catalonia, and they give a shady cover. The French would pollard them, which can be charming.

Go for quality: Good paving, not concrete. Elegant street furniture (for street lights, call the Union Metal Co. in Canton, Ohio, which never threw away the designs and casting molds from the the City Beautiful era of the 1900’s). This is an embellishment for your city, a place you want to show off.

Encourage life: This is the place for vendors of all kinds, for kiosks, for cafés—whatever there’s room for.

Just offhand, we can think of some possible candidates for the treatment. Upper Broadway, for one. Now, most of it has a wide median planted with shrubs, a bit daft in a city that can’t afford to waste space. Another in New York is Seventh Avenue in Harlem, at least the bit around 125th St. that isn’t entirely residential (but I wonder what the shopkeepers there would say about the idea). Cleveland’s low-traffic, 110-ft wide Superior Avenue, between Public Square and East 12th, would be perfect.

Architects John Massengale and Dover, Kohl and Partners have recently come up with an excellent proposal for a true rambla on Second Avenue at 86th in New York, for Urban Design Week 2011: the Yorkville Rambla.
Posted by Dana Facaros and Michael Pauls at 13:56