This corner has already expressed its open-eyed wonder at the ever-changing world of public art, and we’re always glad to see new nations adding to the possibilities for non-official fun. And we’re always glad for news from Bulgaria, the land of attar of roses and music in 11/8 time. Back last June, a prankster they’re calling the ‘Bulgarian Banksy’ struck at the Monument to the Soviet Army in Sofia. 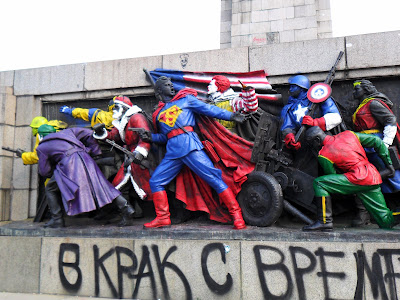 From left to right: The Mask, The Joker, The Wolverine (who’s he?), Santa, Superman, Ronald McDonald, Captain America, Robin and Wonder Woman. The graffiti underneath says: ‘In step with the times’ (you can see more here).

Almost immediately, Bulgarian and international artists ginned up a campaign to preserve the new paint job, but that wasn’t very likely to happen. The Russian bear never growls louder than when one of its Stalin- or Khrushchev-era war memorials is attacked, which in the former lands of the Warsaw Pact is about once ever fifteen minutes. Plenty of people in those countries still remember what life was like in the decades after their ‘liberation’ from the Nazis. City officials often dismantle them or hide them away in playgrounds in gypsy neighborhoods whenever they can get away with it; younger folk use them for perfecting their spray-paint technique. The big city centre ones, like Sofia’s, have usually been sacrosanct. Nobody wants to poke a bear.

Officials vowed the perp would have to clean the monument personally, but even as they spoke government crews under the lash were hurriedly blasting off all the paint. They made a hash of it, at last report there are still orange and bluish splotches all over the thing. The artist remains at large.

Posted by Dana Facaros and Michael Pauls at 11:06