A New Center for Barcelona

Where does Barcelona get all the money? Better not ask, unless you’re a Catalan taxpayer. In this city with more ‘cultural centers’ than some dogs have fleas, every year seems to bring another publicly-financed megaproject. A Barcelona reviving after the death of Franco started its edifice complex in the 80’s, gearing up for its date with the Olympics. They really haven’t let up since, despite the dubious architectural quality of most of the results. But this time it’s different. Barcelona is up to something really big, and for once, it looks like they may get it right. 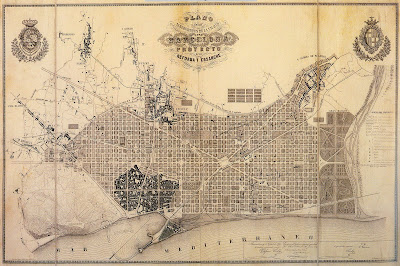 The Plaça de les Glòries Catalanes was conceived in Ildefons Cerdà’s great 1859 plan for the Eixample (‘extension’). That’s it in the center of the plan, below, at the spot where Avinguda Diagonal and the Gran Via meet. Cerdà meant it to be the center of the new Barcelona, but he would be betrayed by shifting patterns of fashion and real estate. The Square of Catalan Glories became a tawdry urban backwater, famous only for changing buses, and for the huge, surreal flea market called Les Encants that still, for the moment, graces its northern side. Eventually, Franco slopped a mess of concrete road junctions around it.

Barcelona resolved to fix up the Glòries in the 80’s. In those days, a city bursting with cash and energy was convinced it had the architectural and artistic talent to match. Barcelona was wrong. Nearly all of its early megaprojects were hideous flops, and none more so than the rebuilding of the Glòries. Here, a demented architect simply rearranged Franco’s auto flyways into a giant traffic circle in the sky, propped on concrete piers that covered most of the square. City Hall was promised that the people would delightedly gather underneath and perhaps open up cafés and dance sardanas; instead it rapidly became a spooky, crime-ridden wasteland. Within a few years of its opening, locals were screaming for its demolition.

Now they’ve got their wish. Photos of this incarnation of the Gloriès can still be found here and there on the web, though one suspects the Barcelona municipality is secretly buying them up to hide the evidence. Now they’re doing it all over again, at a cost of over a billion euros, and this time good, simple planning and a massive revival of investment in the area have coincided for a new Glòries that soon might become one of Europe’s iconic urban spaces. 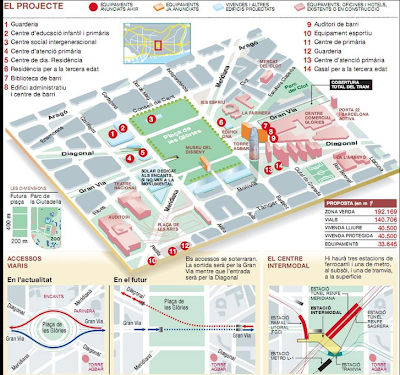 As Boston learned with its Big Dig, the simplest and best solution was also the most expensive and nerve-wracking: get rid of the cars. Here too, the only way to do that was to swallow them underground, not an easy job in a spot where three major roads meet, and will have to share the underground space with metro, tram and bus stations. On top, we’ll see a huge new park—the size of eight soccer pitches. How such a large open space gets landscaped, with all that infrastructure underneath, is a problem they’re facing now, and how it can be integrated into a dense city neighborhood without seeming a void remains to be seen.

Right now, though, the stars are aligning for the new Glòries. Jean Nouvel’s sparkling, LED-lit, 466-ft pickle, the Torre Agbar, was built here in anticipation of the Gloriès plan. Already it is a favorite with the Barcelonans; they’ve started spontaneously gathering here to mark the New Year. A prominent local architect, Oriel Bohigas, is building an intriguing Museum of Design (DHUB) in the park, while the old industrial area to the south is being transformed into ‘22@’ (say it ‘vint-i-dos-arroba’), the city’s growing IT and arts district. A major shopping center is in place, and plenty of other private investment is lined up waiting for this pesky depression to go away.

Barcelona, the urban compulsive exhibitionist, is at its best with things that are preposterously colossal, over the top, out of scale (and when they say a billion, pencil in three; development here works just like anywhere else). In the past, Barcelona has often found a way to make its follies pay off. Another part of the Cerdá plan, the Plaça de Catalunya, is one of the biggest squares in the world, but you never seem lost in a vacuum there. The odd shape and the edgy 20’s commercial buildings around it make it a visually unforgettable place, and it’s always full of people. Maybe, with a little help from some second man Barcelona will get lucky again. 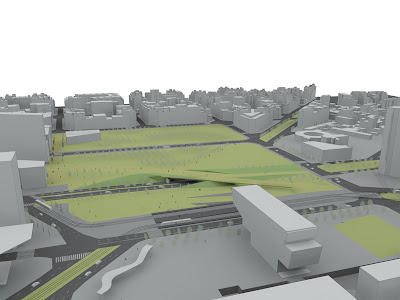 Posted by Dana Facaros and Michael Pauls at 14:01