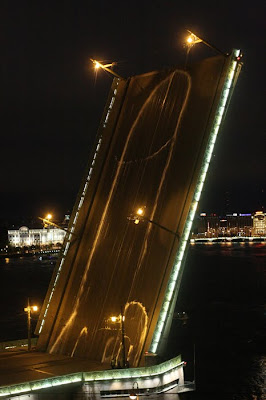 photos flagrantly lifted from Fatcap, a wonderful site dedicated to street art all over the world.

­­
While we’re on the subject of public art, a tip of the hat to Voina, a Russian dissident art group that has been standing up for freedom in the most surprising ways.

One of Voina's symbols is a blue bucket, to mock the cop lights that big shots put atop their cars when they want to breeze through Moscow traffic. They like to put buckets on their heads and run over the villains' limousines, when they can catch one. The police are their special targets, and they made all Moscow laugh when they turned over six police cars in a single night—police cars with drunken, sleeping cops inside.

One member made the news for smuggling a chicken out of a supermarket in her vagina, for reasons not entirely clear. Voina has staged brief occupations of police stations, and a naked orgy in the State Museum of Biology. They also once put on an impromptu punk concert in a courtroom during a dissident trial, playing a catchy tune called ‘All Cops Are Bastards’. On Che Guevara’s birthday, they even stormed the Russian parliament, and manage to storm right out again and get away before the police could appear, leaving their calling card in laser projection on the building’s wall. 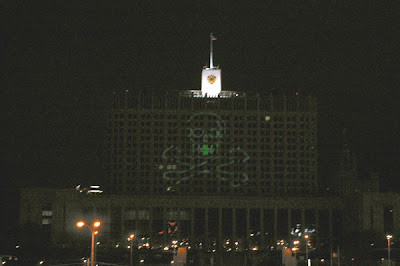 They‘ve been bailed out on one occasion by Banksy himself, who has contributed over £ 80,000 to their cause. Voina’s greatest exploit, so far, was the erection, so to speak, on the Liteiny drawbridge in St. Petersburg in June 2010. The 65-ft dick was pointed directly at the offices of the Russian regime’s heavies, the Federal Security Service. If the art seems a little careless, it was painted under duress. The Voina artists had to run with their paint cans while the bridge guards were chasing them, and they still managed to get the job done.

The Russian authorities, understandably, are not amused. But this isn’t the old days, and they’ve treated Voina members with just about the same measure of casual brutality and robust prosecution that they could have expected in, say, the United States. Most of the leaders are in jail right now; some are still awaiting trial for serious charges. They could use a little support.

Posted by Dana Facaros and Michael Pauls at 12:02